An article published in the Boekenweek Magazine 2020

Cabaret performer Erik van Muiswinkel is a bibliophile and a great fan of prohibited books. In the Embassy of the Free Mind he feasts on centuries-old blasphemous dictionaries and de luxe bibles. Shortly to be viewed online on the museum’s website.

The Bibliotheca Philosophica Hermetica is the name of the book collection of the Embassy of the Free Mind, a museum and a platform for free thinking. With its 25,000 often centuries-old books, the library is the world’s largest collection of rebellious thought, challenging religious and social hierarchies. Its authors reflected on such questions as ‘Who am I?’, ‘Where do I come from?’ and ‘Where am I going to?’ but also on more earthly issues such as the freedom of expression.

The Ritman collection or the Bibliotheca Philosophica Hermetica has a magical ring to it for book lovers, and rightly so. Harry Mulisch liked to study there, Umberto Eco and Dan Brown paid visits. They came for the real thing, centuries-old books that partly provided the basis for their historical thrillers. In the Ritman collection they found the mysterious ‘rebellious thinkers’ of the early modern period: alchemists, visionaries and mystics, humanists and even the occasional early Enlightener. 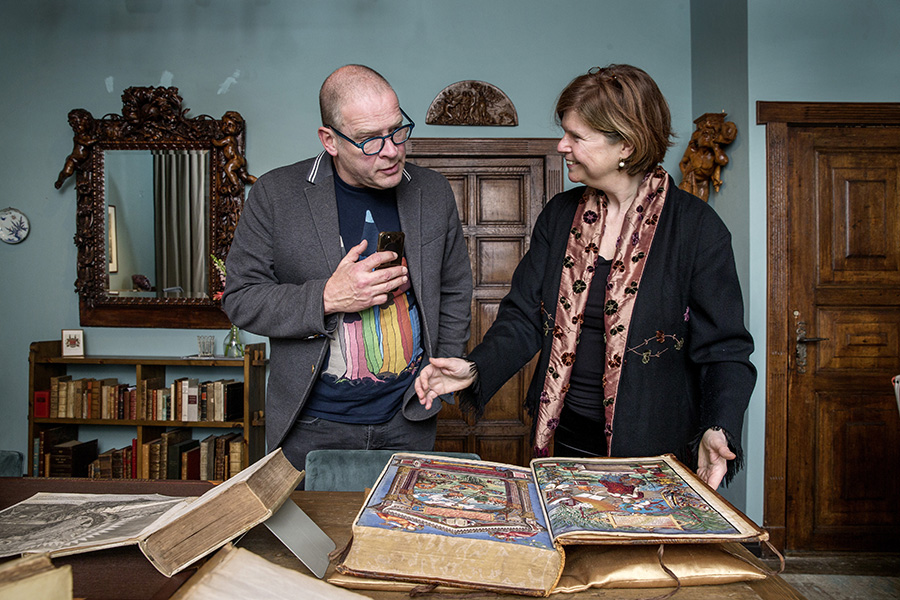 I’m a guest in the collection’s permanent home: the ‘House with the Heads’, a canal mansion-turned-museum on Amsterdam’s Keizersgracht, where the Embassy of the Free Mind, now part of a foundation, makes that world-famous collection accessible to the public. Curator Cis van Heertum has prepared a grand buffet of more than three centuries of astonishing books. An unbelievably beautiful hand-coloured copy of a Bible printed in Antwerp, a copy of Spinoza’s masterly Tractatus Theologico-Politicus, folio editions of works by the Swiss medical reformer Paracelsus and the German philosopher Jacob Böhme, the Corpus Hermeticum even, that ‘Bible’ of natural philosophers and other searchers. And then, suddenly, I’m face to face with that unassuming-looking little gem by Adriaan Koerbagh, bound in contemporary vellum.

If we were to establish a Canon of Rebel Thinkers in the Netherlands, Adriaan Koerbagh would be high on that list. A razor-sharp 17th-century physician and lawyer who was ahead of his times by a century or two. He paid with his life for his brazen criticism of the authorities, secular as well as religious. Here I am, on Keizersgracht 123, being simply allowed to pick up and leaf through his Bloemhof, a book long believed to have been banned, a deliciously blasphemous dictionary published in 1668.

The greater part of the early printed books and manuscripts of entrepreneur and mecenas Joost Ritman have been digitised. Some of them contain ‘secret’ knowledge, to be found with gnostics and alchemists, but also with the inspirers of modern thought such as Koerbagh, Spinoza and Coornhert. The contents of all these original books can be browsed behind your computer. The valuable books themselves have at last found a haven on Keizersgracht.

Biblia Sacra, the ‘polyglot Bible’ which issued from the press of the renowned Antwerp printer Christopher Plantin between 1568 and 1573. For decades a visit to Plantin-Moretus Museum, Plantin’s former printing house, was mandatory for students of Dutch. Not a punishment, though ! This Bible has been hand-coloured throughout. The sacred texts are printed in five languages: Hebrew, Greek, Latin, Syriac and Aramaic. I’m being shown the first of eight pricelessly valuable volumes: five volumes of text, three volumes of commentary. 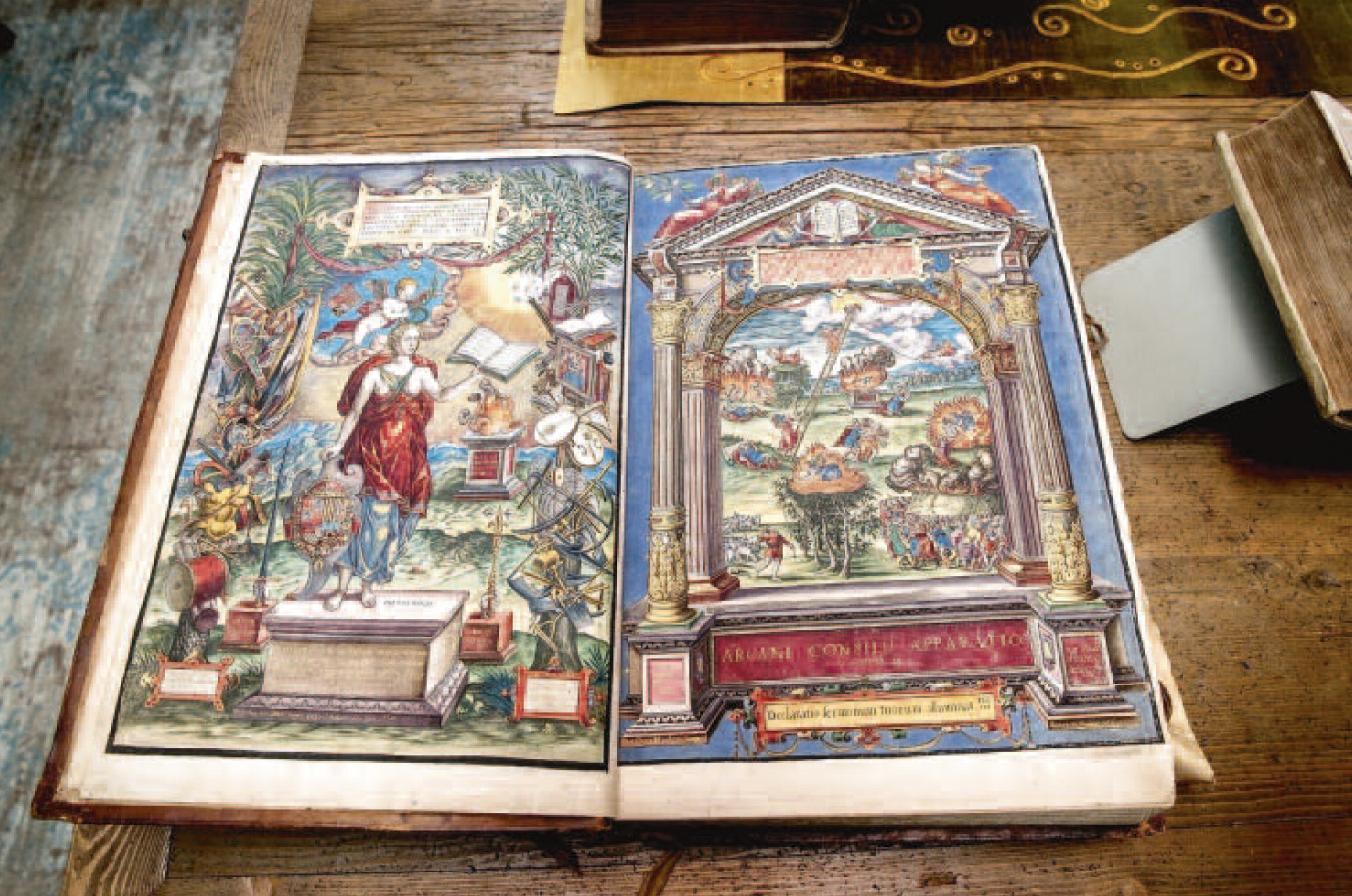 A superbly coloured and elegant fold-out map depicting the cosmos and the origin of creation. In the margins the following text: Byss and Abyss, No Thing and All, Time and Eternity. It is included in an 18th-century edition of the collected works of Jacob Böhme, a 17th-century shoemaker from Görlitz, who had a profound mystical experience. His mystical work is still being studied today. His panoramic insights were to influence later generations of philosophers such as Leibniz and Hegel. An exhibition on his life and work can be seen in the Embassy of the Free Mind through 18 April next month. 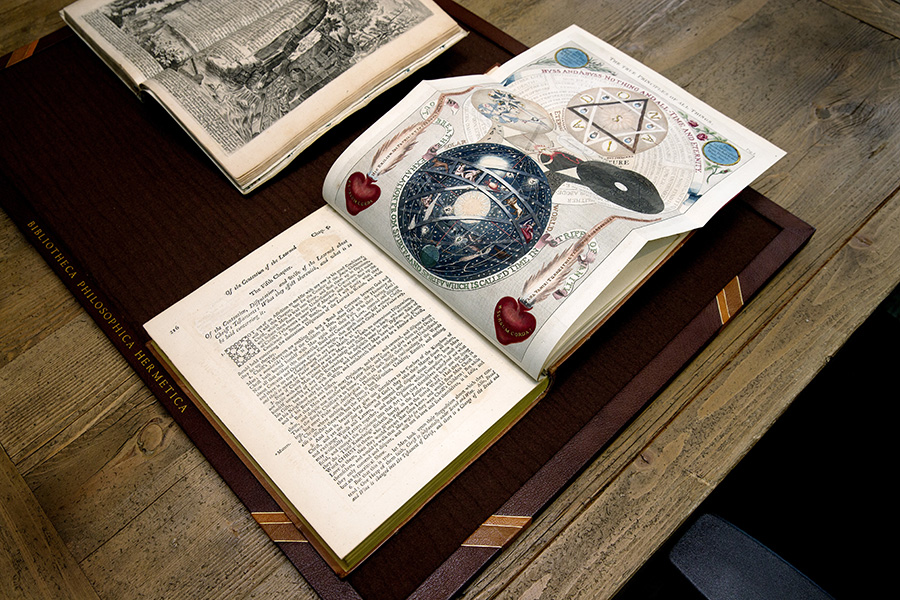 A fold-out print from the Musaeum Hermeticum (1678) illustrating the Emerald Table, a seminal Hermetic text. The key message is: As above, so below: macrocosm and microcosm are inseparably connected. Alchemists, astrologers and magi were all inspired by this text attributed to the legendary Hermes Trismegistus. The real author(s) is or are unknown; not uncommon for Sacred Texts. The engraving itself is a masterpiece by Matthäus Merian, father of the famous naturalist and artist Maria Sibylla Merian. 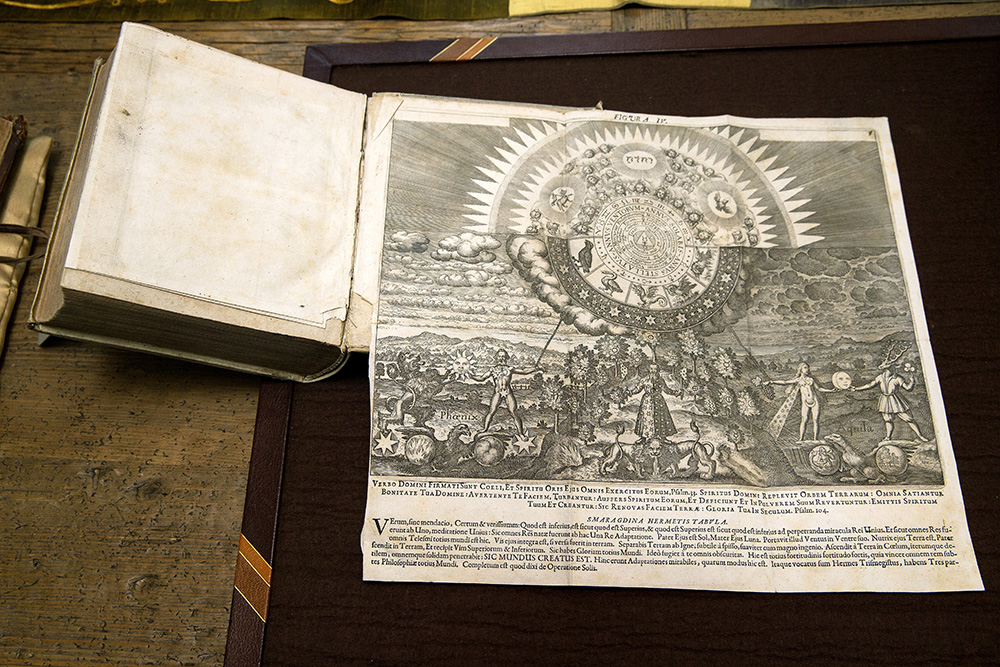 The real author(s) is or are unknown; not uncommon for Sacred Texts.

The great 16th-century  physician and natural philosopher Heinrich Khunrath, kneeling in his own Amphitheatre of Eternal Wisdom (1609). On the left is the oratory for fulfilling spiritual duties, on the right the laboratory for conducting experimental science. The encounter between theology and empiricism in those early days of the scientific  revolution can hardly be depicted more pertinently. 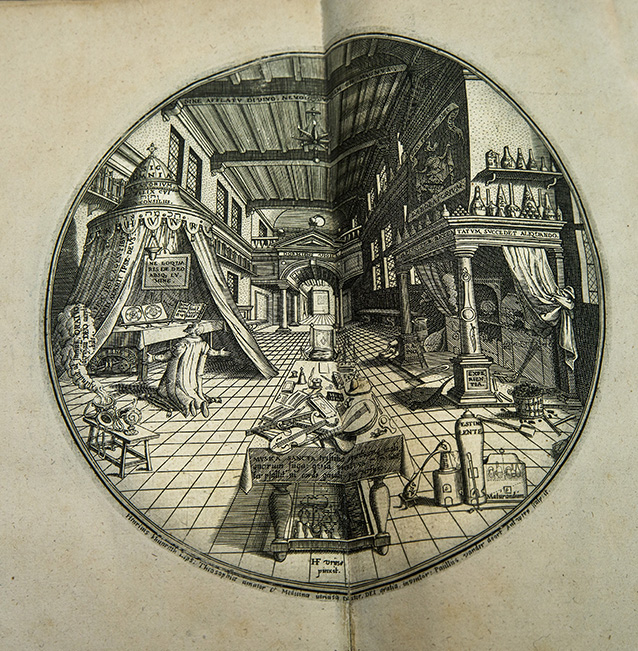 Cabaret performer Erik van Muiswinkel proudly holding a work, published in 1668 by a real rebel: Adriaen Koerbagh’s Een Bloemhof van allerley lieflijkheyd. Koerbagh compiled this lively dictionary for the common man under the pseudonym Vrederijk Waarmond (‘peace-loving true-mouth’), in which he offered critical explanations of jargonese in the fields of philosophy and theology. Bloemhof barely missed being banned by the Calvinist authorities of Amsterdam, but Koorbagh did think it advisable to take refuge in the ‘free city’ of Culemborg. He was eventually convicted to serve a prison sentence in the Amsterdam ‘rasphuys’, where he died after a year of forced labour.

The letters of the Apostle Paul – innocuous enough, one would think. This copy of an early 16th-century edition of the Epistole divi Pauli from a medieval monastery, however, has been heavily censored. The commentary by the editors of the Pauline letters was not always to the liking of the monks. Their solution was to paste over the offending passages with pieces of paper cut from an older manuscript.

This section was added to the article appearing in the regionally distributed Book Week Magazine. 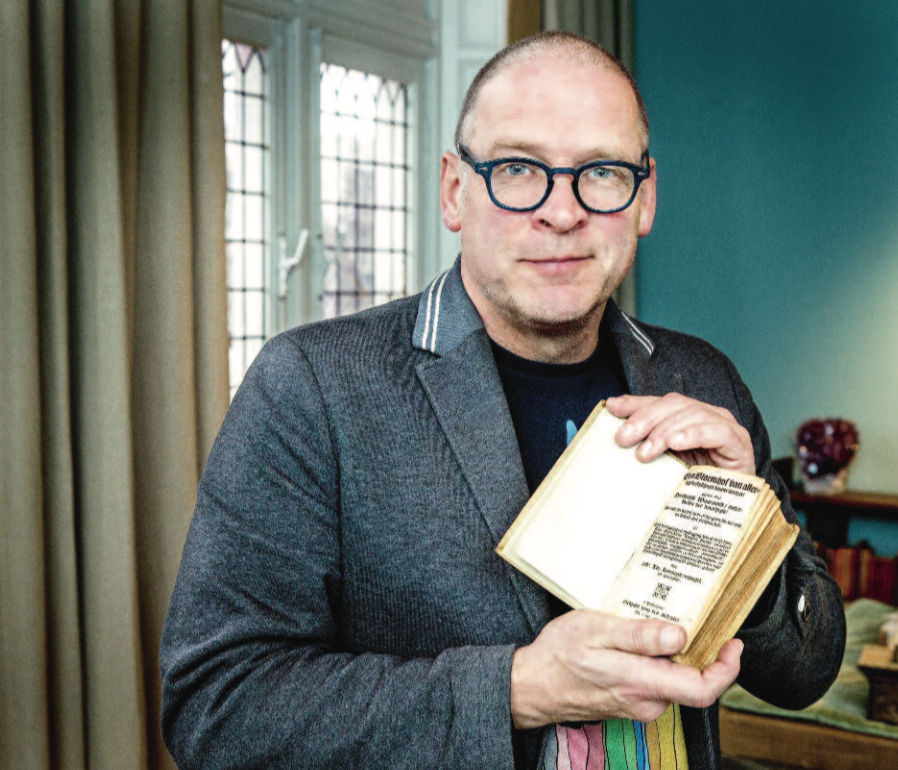 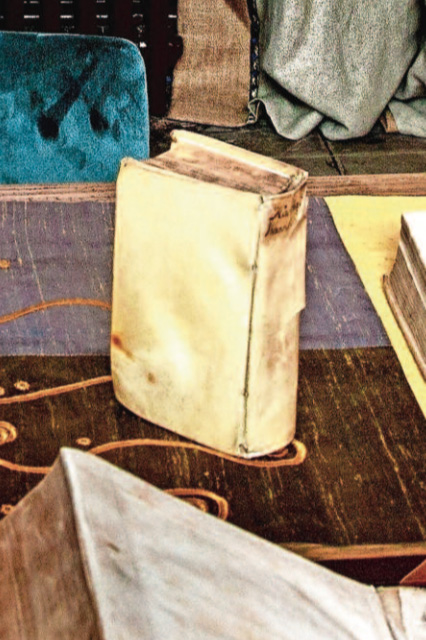