Jewel in the crown of Amsterdam’s canal district

An article from the magazine 'Monumentaal', April 2020

Jewel in the crown of Amsterdam’s canal district

Restoration brings new lustre to House with the Heads

FOR ALMOST 400 YEARS THE HOUSE WITH THE HEADS WAS HOME TO SEVERAL FAMILIES AND ORGANISATIONS. A RENOWNED GUEST WAS THE CZECH PHILOSOPHER COMENIUS.

The restoration of the façade of the House with the Heads on 123 Keizersgracht was completed at the end of last year. It marked a new phase in the history of this listed building, the façade of which is held by experts to rank among the finest and most authentic façades of Amsterdam’s canal district.

A colourful palette of residents

In the course of its almost 400 years of existence, the House with the Heads on 123, Keizersgracht in Amsterdam was home to a colourful succession of residents: De Roos art dealers (1779), a secondary school (HBS, 1865), the city’s music school (Conservatorium, 1909-1931) and the municipal heritage conservation department (Gemeentelijke Bureau Monumentenzorg, 1983). It tallies with the tradition of this listed building that it is now home to The Embassy of Free Mind, the museum and the Bibliotheca Philosophica Hermetica (BPH). The restoration of the façade has been made possible through support from the Stichting Gansoord, the Hendrik Muller Fonds, the Edith Oen-Oei Schone Kunsten Fonds, the province of North Holland and private sponsors.

Nowadays the House with the Heads is home to the Embassy of the Free Mind (EFM): a homegrown museum, library and a platform for free thought, inspired by the philosophy of the Bibliotheca Philosophica Hermetica collection. In his time the 17th-century industrialist and benefactor Louis de Geer referred to the striking listed building on Keizersgracht as ‘a heady house’. He wasn’t only thinking of the façade, but also of the determination and defiance of the Amsterdammers who made it their home for almost four hundred years. Four generations of the aristocratic De Geer family lived in the mansion.

In the course of time the House with the Heads accommodated a wide diversity of people, organizations and institutions. This extraordinary house has gloriously survived the ages. Various owners recognized the importance of maintaining and protecting it. Jozef Ritman, who is in charge of the restoration campaign on behalf of the Embassy of the Free Mind, says the restoration and renovation is carried out in stages. “We remain open as a museum while the building activities are carried out. The campaign involves more than just the front of the house. The roof, the side and rear walls are included in the plan. When this is finished in the course of 2020, the top floors and the basement will be renovated and refurbished. A lift will also be installed. As the façade is the building’s most prominent feature, however, we decided to tackle it first.”

The restoration plan for the House with the Heads was already drafted in 2016 by architect Hans Vlaardingerbroek. Before the project went ahead, Olga van der Klooster of Bureau ABK – Plantage Zorg en Hoop carried out colour research in April of last year. Van der Klooster, a historian of architecture, a specialist in traditional uses of colour and decorations, examined the previous renovations and restorations of the building. Watercolours by Cornelis Springer (1817-1891) and city views by Jan Van der Heyden (1637-1712) were a great help. In addition to source research, she also examined paint samples taken on the site using a stereo microscope. Van der Klooster: “As I found very few layers of paint, my colour advice is mainly based on historical images.”

The House with the Heads was designed by master builder and sculptor Hendrick de Keyser and proudly stands on two plots of land. The double house was originally built for residential and commercial purposes. It is an extraordinary house from an architectural-historical point of view because of the façade’s symmetrical arrangement, which is a combination of red brick and Bentheim sandstone, richly decorated with date plaques, tablets, vases and obelisks.  The façade is a beautifully executed stepped gable of a type also known as ‘Amsterdam Renaissance’.

There are six large sandstone busts (heads) in the façade representing Roman gods of mythology. Another striking element is the coat of arms of Louis de Geer, who bought the house in 1634. The gods can be identified by the accompanying attributes: Apollo (laurel – the arts), Ceres (grain – agriculture), Mercury (merchants and the god Hermes), Minerva (intellect and wisdom), Bacchus (wine and feasts) and Diana (goddess of the hunt and of birth). The crowning element above the gable and the lion’s head on the House with the Heads have also been restored. Another notable feature is the gable stone featuring the name of the Czech educationalist and philosopher Jan Amos Comenius who was a frequent guest here from 1656 until his death in 1670 . The busts flanking the main entrance symbolize the ideal of the Mercator Sapiens, the wise merchant.

Integral part of the design

There’s logic in the sequence of the busts, there being a balance between female and male gods. The question when the ‘six heads’ were added to the front of the house is not easily answered. Whether they were commissioned by Nicolaas Sohier, a rich hosier and stock trader of Flemish descent for whom the house was built in 1622, or were added by Louis de Geer in 1634, is not clear. Jozef Ritman does not doubt that the busts were an integral part of the original design. “This is how the art lover Nicolaas Sohier envisaged it. He came from Flanders and was a friend of the painter and architect Peter Paul Rubens. Rubens had a mansion built on De Wapper, one of Antwerp’s central squares, around the same time (1610-1622). Here to, we see busts on the façade that reference the Italian Renaissance.” Architecture historian Olga van der Klooster thinks this is very plausible, as cultural influences travelled north from the south in this period.

The entrance is a significant element in the façade of the House with the Heads. “Passers-by in the 17th century were meant to understand the owner was someone who was familiar with the ideas of classical Antiquity”, Ritman says. “Left and right of the entrance we see Mercury and Minerva, which indicates that the inhabitants had an affinity with hermetic wisdom.” The façade is furthermore adorned with horizontal bands, posts, stone scrolls, vases and lion heads. The cross windows have been restored during the restoration campaign. Ritman: ”This includes the leaded glass windows, which we have restored to their original state. The leaded glass dated from the time the house was built in 1622, but was removed in 1908 and replaced by sash windows during an extensive renovation campaign.”

The stone doorstep was also included in the renovation of the façade. The entrance to the house consists of a double stairway with original 17th- century balusters (moulded pillars). Based on the findings of the colour research, some of the elements were also coloured and gilded. The interior has a number of distinctive features referring to the house’s rich history as a haven for freethinkers such as Comenius and Spinoza. 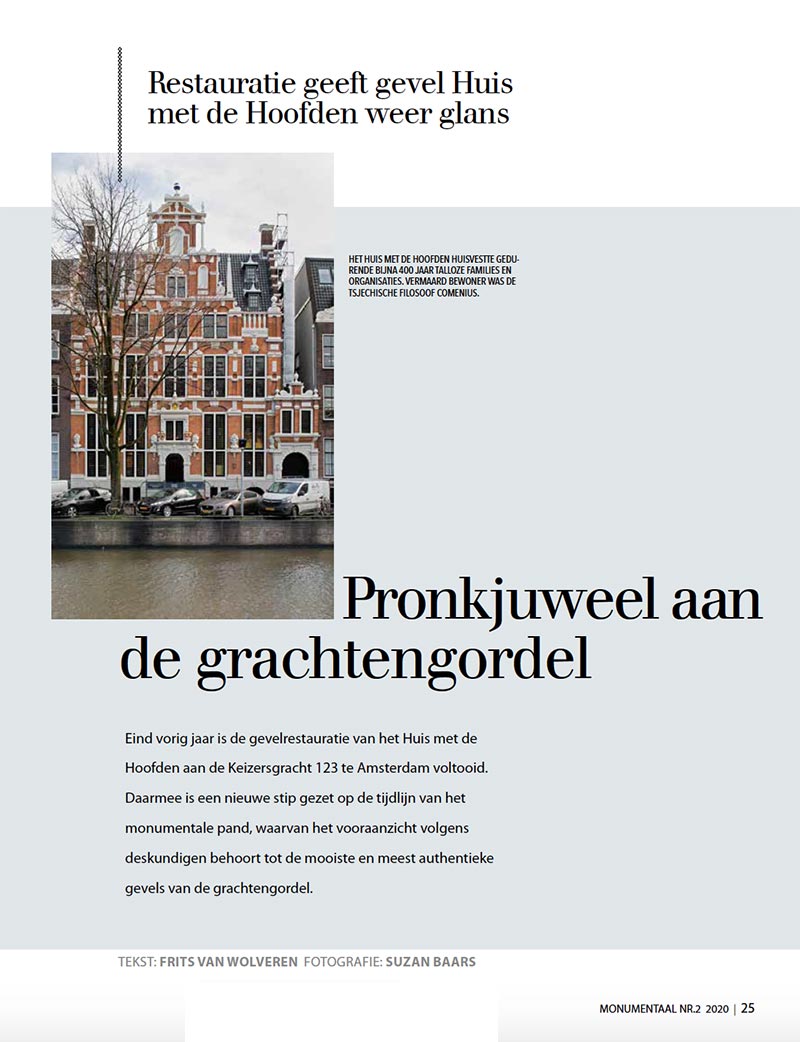