Embassy of the Free Mind

Embassy of the Free Mind in Buurtkrant 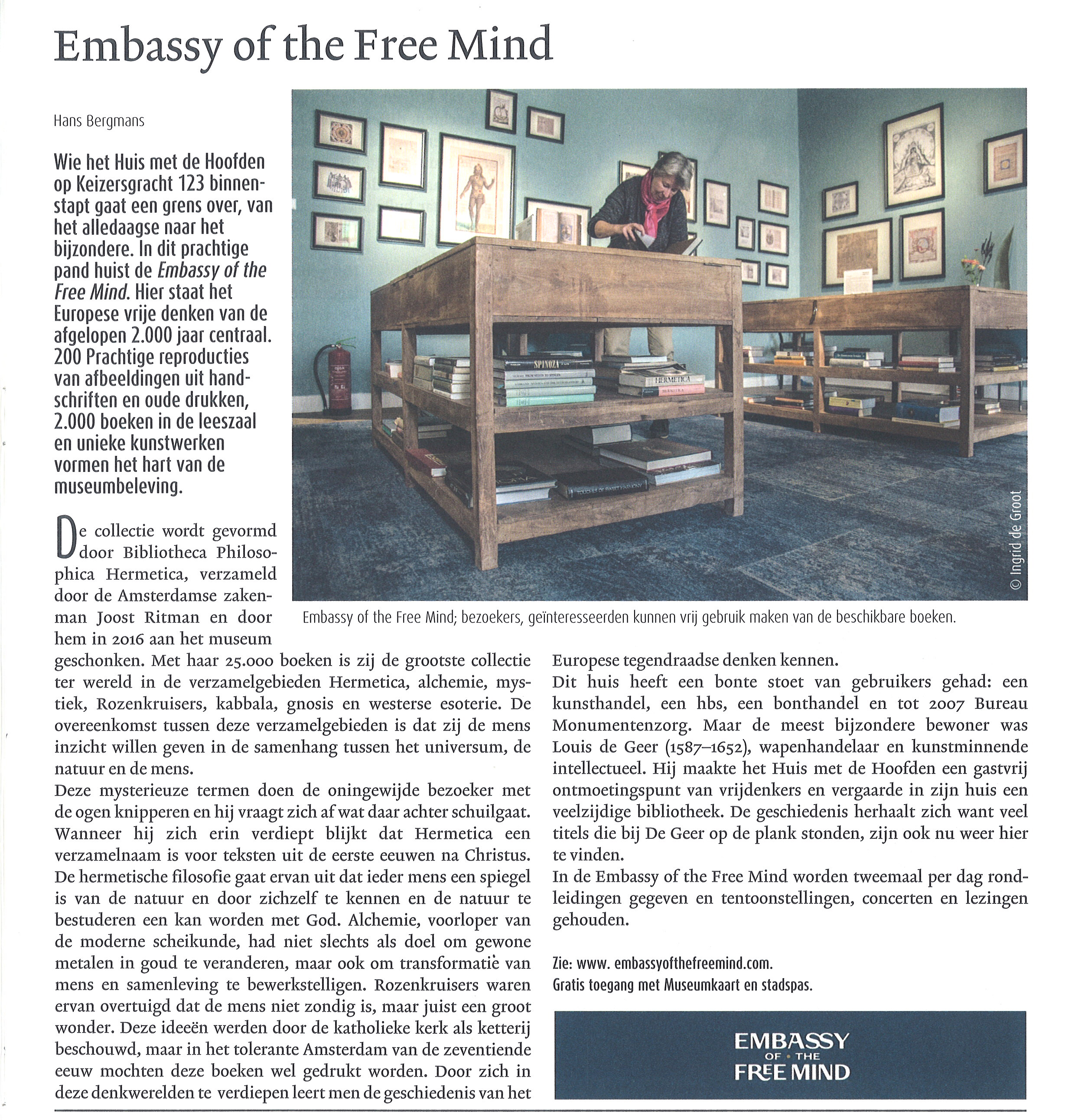 When you step into the House with the Heads on 123, Keizersgracht you cross from the everyday to the extraordinary. This beautiful building is home to the Embassy of the Free Mind which reflects a tradition of 2,000 years of European free thinking. 200 beautiful reproductions of images from manuscripts and early printed books, 2,000 modern editions in the reading room and some unique works of art are at the core of the museum experience.

The collection is that of the Bibliotheca Philosophica Hermetica which was built by the Amsterdam businessman Joost Ritman and donated by him to the museum in 2016. With 25,000 books it is the world’s largest collection in the fields of Hermetica, Alchemy, Mysticism, Rosicrucians, Kabbalah, Gnosis and Western Esotericism. What these collections have in common is that they offer insight into the connection between universe, nature and humankind.

These mysterious terms are probably not immediately clear to the uninitiated visitor, who may wonder what is behind them. A closer look shows that Hermetica is a collective term for philosophical texts dating from the first centuries CE. According to Hermetic philosophy, each person is a mirror of nature. By coming to know oneself and studying nature, it is possible to become one with God. The aim of alchemy, as it were a precursor of modern chemistry, was not only to transform base metals into gold as is commonly assumed. The objective was to achieve a transformation of man and society. The Rosicrucians were convinced man was not sinful. On the contrary: he was a great miracle. These ideas were regarded as heretical by the Roman-Catholic Church but could be freely printed in the tolerant city of Amsterdam in the 17th century. To explore these views is to become acquainted with the history of European contrarian thinking.

This house has had an interesting succession of occupants, including an art firm, a secondary school, a fur business and the city’s Heritage Preservation Department (until 2007). The most prominent occupant by far, however, was arms dealer and art connoisseur Louis de Geer (1587–1652). He turned the House with the Heads into a welcoming meeting place for free thinkers and brought together a well-equipped library in his house. History repeats itself as many of the titles that were to be found on the shelves in De Geer’s home are again to be found here.

There are general tours of the Embassy of the Free Mind twice a day. The museum has a programme of exhibitions, concerts and lectures.